Almudena Machado Jiménez (President) is currently working on her PhD thesis at the University of Jaén, where she is a lecturer at the Department of English Philology. She holds a BA degree in English Studies (University of Jaén) and was awarded with the Bachelor’s Degree Extraordinary Prize. She also holds a MA in Teacher Training in Foreign Languages and a MA in English Studies with a specialisation in English Literatures and Cultures at the same university. She has been a visiting researcher at the SOAS University of London and the ULICES University of Lisbon. Her research interests are gender studies, postcolonialism and utopian studies, particularly the notions of sisterhood and motherhood in contemporary feminist dystopias.

María Magdalena Flores Quesada (Vice-president) holds a PhD in English from the University of Málaga, which she completed thanks to a predoctoral contract (FPU). She holds a BA on English Studies, a MA in English Studies and Multilingual and Intercultural Communication, and an MA in Language Teaching. She now works as a lecturer at the University of Málaga. She has delivered papers in both national and international conferences, and she has been part of several organising committees in national and international seminars, workshops, and conferences. Her main research interests are vulnerability, ethics of care, and mother-daughter relationships in the contemporary British novel written by women authors. 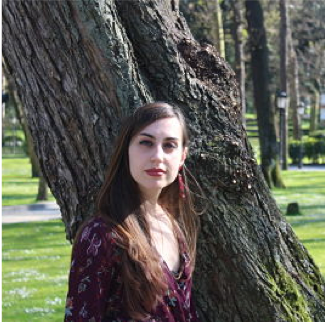 Rocío Riestra Camacho (1st secretary) holds a PhD from the University of Oviedo, where she researched about the cognitive bibliotherapeutic potential of young adult sports fiction in the treatment of anorexia. She holds a degree in English Studies from the same university, having been awarded the Extraordinary End of Studies Degree Prize. She obtained her MA in Gender Studies at her home University, where she stayed for one year and at the University of Utrecht for another, where she was able to complete it with an Erasmus Mundus mention. She also holds an MA in Teacher Training for Compulsory Secondary School and Baccalaureate Programmes, Career Education and Language Teaching from the Spanish Long Distance University and is now enrolled in the Psychology Degree at the same institution. She has been awarded a FPU scholarship.

Teresa Martínez Quiles (2nd secretary) is currently working on her PhD in English Literature at the University of Alicante, where she was awarded the Extraordinary Degree Prize for her BA in English Studies. She also holds an MA in Translation Studies and an MA in Teacher Training in Secondary Education. She has worked as an adjunct lecturer at the Catholic University of Murcia (UCAM) and has participated in both national and international conferences. She has been visiting researcher at the University of St Andrews (UK) and at Berkeley University, CA. Her research interests are feminist and postcolonial studies, focusing on contemporary Black-British and South Asian women’s literature. She has been awarded an FPU scholarship by the regional government of Valencia.

Juan-José Martín-González (Treasurer) holds a PhD in English literature from the University of Málaga, where he is currently research fellow and lecturer. He was visiting researcher at Liverpool John Moores University (UK) during his PhD programme. He has published articles, book chapters and contributions to conference proceedings about neo-Victorian fiction, postcolonialism and maritime and migration studies, and has delivered papers about these topics in numerous national and international conferences. His most recent publication is the monograph Transoceanic Perspectives in Amitav Ghosh’s Ibis Trilogy (Palgrave, 2021).

María García Gámez is currently working on her PhD thesis as a fully funded candidate (FPU) at the University of Málaga, where she is also a lecturer. She holds a BA degree in English Studies and a MA in English Studies and Multilingual and Intercultural Communication (UMA). Her main research interests involve corpus linguistics, sentiment analysis, and the use of social media platforms from a linguistic perspective.

Margalida Pizarro-Sirera is currently lecturing and working on her PhD thesis at the University of the Balearic Islands. She holds a BA Degree in English Studies (UIB) and a double MA in Modern Languages and Literatures (UIB-UNIVAQ). She is interested in investigating language, cultural studies, social media, the Trump phenomenon and American politics.

We've all experienced at some point or another writer's block, but how do we deal with it? Here are some strategies you can try, do you have any others? Let us know!

Have you ever tried using music as a motivation tool for writing? Before setting yourself up to write one of these days, try putting on a song that you enjoy and dance to it, this will increase your dopamine levels and may help you feel motivated...

Here are some of the essential objects that we believe will make your life easier as a #PhD student. Do you have any other in mind? Let us know! #phdlife #phdchat

@asyrasinfo Proof that something's cooking in the oven these days! Stay tuned for exciting news coming✨

This year's Asyras workshop will take place in Oviedo in June, stay tuned for more information! We will be telling you some news soon 🥳